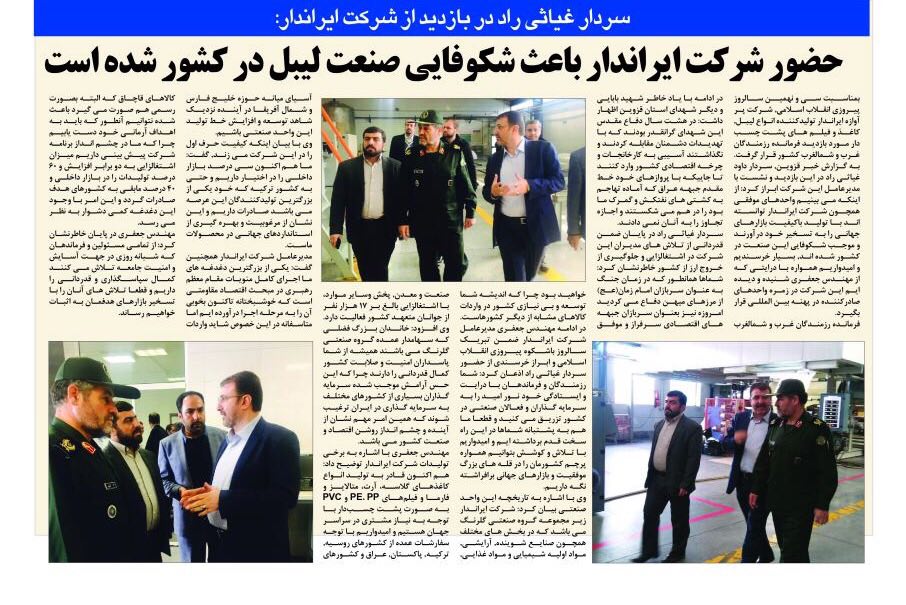 Sardar Ghiyasi Rad visiting the Irandar Company:
The presence of the Irandar company has boosted the country's label industry.

According to Qazvin, Sardar Daud Ghiasi Rad said in a visit and a meeting with the company's CEO: We see successful units such as the Irrandar company have been able to capture global markets with high quality production and boost the industry in the country. We are very pleased, and we hope that we will always have the opportunity to hear from the engineer of Ja'fari and see it as one of the exporters in the international zone.
Commander of the West and Northwest Warriors, in commemoration of Martyr Babaei and other martyrs of Qazvin province, said: "In the eight years of the Holy Defense, these martyrs were expensive to deal with the threats of enemies and not to harm the factories and the economic cycle of the country, The front lines of the front of the Iraqi Front, which were ready to attack our tanker ships and our customs, broke down and did not allow them to be raped.
At the end, Sardar Ghiasi Rad, while acknowledging the efforts made by the company's executives to create jobs and preventing the withdrawal of foreign currency from the country, said: As you defended the borders of the land during the war as the soldiers of the Imam of Time (aj), you are now also the soldiers of the Front You will be honest and successful because your thoughts will be developed without the need for the country to import similar goods from other countries.
In the following, engineer Jafari, the managing director of IRANDAR Company, congratulated the great victory of the Islamic Revolution on the great anniversary of the victory of the Islamic Revolution and expressed his satisfaction with the presence of Sardar Ghiyasi Rad: "You warriors and commanders, with their tact and persistence, inject light of hope into investors and industrial activists in the country, and certainly We have also stepped up our efforts in this difficult way and we hope that we will always be able to keep the flag of our country on the peaks of great success and global markets.
Referring to the history of this industrial unit, Irrandar Company is a subsidiary of safflower industrial group, which is specialized in different sectors such as detergents, cosmetics, chemical and food stuffs, mining, distribution and other industries, with an employment rate of more than 17 Thousands of committed young people live in the country.
He added: "The great family of Fazli, the main shareholder of the safflower industry group, are always grateful to you as the security guards of the country, because this sense of calm has prompted investors from many different countries to invest in Iran, which is very important It shows the future and a clear vision of the country's economy and industry.
Engineer Jafari, referring to some of the company's products, said: "We are now able to produce various types of glace, artistic, metallic and pharma paper, and PE, PP and PVC films, with adhesive back, according to customer requirements around the world, and we hope that with attention Major orders from Russia, Turkey, Pakistan, Iraq, and the Central Asian states of the Gulf and North Africa will see the development and increase of the production line of this industrial unit in the near future.
"We now have about thirty percent of the domestic market and even export to Turkey, which is one of the largest producers of this field, which is a sign of quality and quality," he said, stating that quality is the first word in the company. It is the use of global standards in our products.
The Irandar CEO also said: "One of our greatest concerns is the full implementation of the leadership of the Supreme Leader in the context of the resistance economy, which, thankfully, has been well implemented so far, but unfortunately, in this case, smuggling of goods may take place officially. It does not make it possible for us to achieve our ideal goals, because in the company's vision, we anticipate doubling the employment rate and exporting 60% of the products in the domestic market and the remaining 40% to target countries, and this Despite this, the concern seems a bit tricky.
Engineer Jafari pointed out in the end: "We thank all the officials and commanders who work around the clock for the comfort and safety of the community and will surely prove their efforts by conquering our target markets."